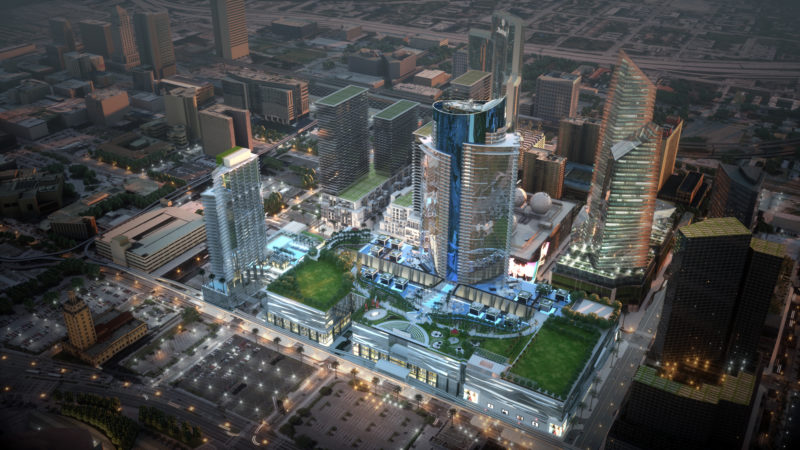 Starting at 2:00 AM on a Saturday morning in late October and ending the following Monday morning before Miami’s rush hour, an army of cement trucks and construction workers collaborated to pour 52 million pounds of concrete into an excavated hole containing 43,000 square feet. Dubbed Miami’s “Big Pour,” the foundation for Paramount Miami Worldcenter is complete and developers have indicated that they’re ready to go vertical. The 700-foot, 60-story residential building will be erected adjacent to the larger Miami Worldcenter project’s 450,000 square feet of retail.

The first phase of construction for Miami’s second-largest urban development comes approximately 13 months after demolition crews cleared 1.1 million square feet on the north side of Miami’s downtown. According to Paramount Miami Worldcenter developer and CEO, Daniel Kodski, the development will represent a futuristic city-within-a city, and will be a defining symbol of downtown. “Paramount is going to be a significant addition to Miami’s skyline. When people come to Miami, whether they are coming from the airport; coming from the north or from the south, this is going to be the building they see in the center of the city. It’s going to signify that you have arrived in downtown Miami.”

The new development is a major source of excitement and anticipation for developers and investors alike, an excitement that is also shared by many of the city’s employment-seeking residents. With the development’s foundation in place, the remaining construction will provide thousands of jobs to the people that need them most, according to Managing Principal of Miami Worldcenter, Nitin Motwani. “We are going to put people to work. That’s the bottom line. We have trained people ourselves with Miami-Dade College and Tramcon. We are hiring tens of thousands of people from the community; from zip codes that most need it. If you’re looking for a job, Miami Worldcenter is the place for you.” Upon completion of construction, the development will continue to provide short and long-term jobs for employment-seekers.

Paramount Miami Worlcenter is expected to be completed in 2018, and will feature 512 units with 10-foot ceilings and a slew of high-end amenities, including terraces and private elevator service to the promenade and Skydeck. What will be arguably the most heavily-amenitized condo-tower in America, it’s no surprise that investors are chomping at the bit to get a piece of this high-end real estate. “Downtown Miami real estate is considered amongst the most valuable and most stable investments in the world,” commented Daniel Kodsi. “The area is listed as the seventh most-active global investment destinations, according to CBRE.”

Kodsi went on, “Downtown Miami buyers typically experience annual valuation increases of four to 10 percent and more. And, whereas, New York and Los Angeles are typically the most attractive U.S. real estate investments to foreign buyers, Paramount Miami Worldcenter is increasingly enticing. Our buyer pool is filled with people from more than 30 countries, including Argentina, Brazil, Canada, China, Russia, Venezuela and elsewhere.” One-bedroom units start at $700,000 and penthouse prices start at $4 million.