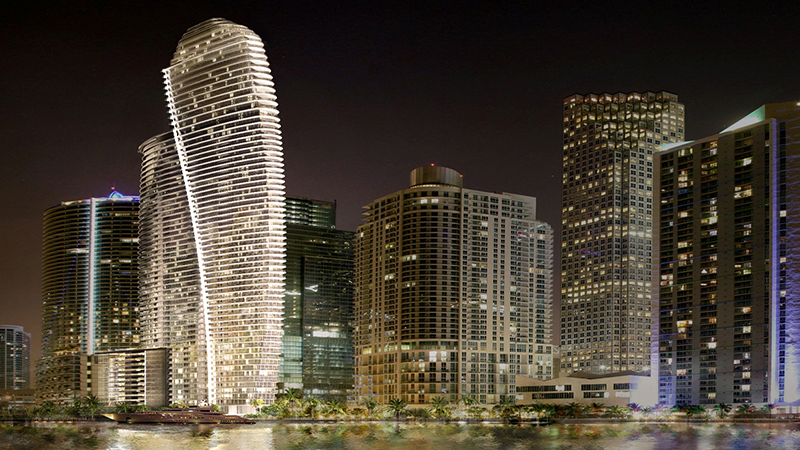 The presence of luxury brands such as Porsche Design, Fendi, Armani/Casa, and Bentley in Miami’s real estate market is well known. Aston Martin has announced it will be joining this high-profile group with its first branded condo tower in Miami. The luxury sports car company will be teaming up with the Coto family of Argentina to erect the Aston Martin Residences at 300 Biscayne Boulevard Way.

The 66-story development will be situated at the mouth of the Miami River, and will feature 1 to 4-bedroom units as well as 7 penthouses and a duplex penthouse with private pools and terraces. In total, the development is slated to contain 390 units, with pre-sales to commence sometime in November as per German Coto.

Marek Reichman is heading Aston Martin’s design team, and has indicated that they will be integrating the car company’s signature brand into the building’s interior design to influence door handles, leather, color palettes, reception desks, and other fixtures. Amenities will include two private lobbies, a two-story fitness center with a spa, infinity pool on the 55th floor, a screening room, British club, and a yacht marina.

Managing director of Aston Martin brands, Katia Bassi said developers in Miami and other major cities have contacted the car company in the past. “We are not everywhere for a reason,” Bassi commented. “Entering into the real estate market has been a priority but we wanted to do it the right way.”

The developer of the project, Riverwalk East Developments LLC paid $125 million for the 1.25-acre parcel back in 2014. The developer purchased the land from developers Ugo Colombo and Diego Lowenstein, after their initial plans to build Epic’s second phase on the site fell through. The Aston Martin Residences are scheduled to break ground in the summer of 2017 before opening their doors in 2021.